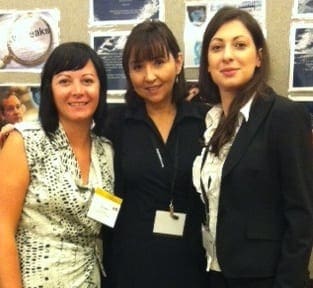 Doctoral students Iveta Imre (left) and Ivanka Radovic (right) stand with Dr. Catherine Luther in front of their poster presentation entitled “Constructing an Image of the U.S.: An Analysis of British and French WikiLeaks News Coverage.”

Current Journalism & Electronic Media faculty members and graduate students presented eight papers, including one that won top faculty paper honors, at the recent 2011 meeting of the Association for Education in Journalism and Mass Communication in St. Louis. Several professors also contributed as panelists, discussants and officers, giving JEM a visible presence at one of the field’s flagship conferences.

The eighth edition of Writing for the Mass Media by Dr. Stovall was also officially unveiled by Pearson/Allyn and Bacon publishers at AEJMC. The new edition of the text, which was used at more than 200 colleges and universities in 2010, contains a great deal of new material reflecting recent changes in media writing and procedures.

Matthew Broaddus, a doctoral student, presented “Seeking to Understand Interactivity on Church Websites” to the Media and Religion Interest Group.

Assistant professor Elizabeth Hendrickson played a key role in the Magazine Division’s programming this year, including serving as a panelist for a teaching session in which she spoke on “Crimping their style: How to help students adapt the 5Ws to the niche reality” and a Professional Freedom & Responsibility session in which she spoke on photo captions and content. Dr. Hendrickson, who is the division’s outgoing secretary and incoming Professional Freedom and Responsibility Chair, also served as the discussant for the division’s top paper session and led a breakout session in a pre-conference dedicated to “Celebrity and Ethics.”

Doctoral students Ivanka Radovic and Iveta Imre, together with Dr. Luther, presented their paper “Constructing an Image of the U.S.: An Analysis of British and French WikiLeaks News Coverage” to the Radio-Television Journalism Division. Radovic and Luther also presented their other paper titled “From State Controlled to Public Broadcasting: Signs of Change in Serbia’s RTS Television Newscasts from 1989-2009” in a session sponsored by the Newspaper Division.

Assistant professor Amber Roessner presented “Gathering the Inside Dope:  The Practice of Sports Journalism, 1900-1930” to the History Division. She also accepted a position on the Society of Professional Journalists’ Education Committee.

Assistant professor Erin Whiteside presented three papers at the conference including the top faculty paper in the Sports Communication Interest Group. That piece was entitled “Ambivalence on the Front Lines? Attitudes Toward Title IX and Women’s Sports Among Division I Sports Information Directors” and written along with Marie Hardin and Erin Ash, both of Penn State University. She also presented “From Inept Intruders to Suspicious Sex Vixens: The Problem of Heterosexuality in Sports Information” in a session organized by the Commission on the Status of Women, and “What Information is Available For Stakeholders on Facebook and How Does This Information Impact Them?” in the Public Relations Division (co-authored with Michel Haigh and Pamela Brubaker of Penn State University). Dr. Whiteside was also elected the Sports Communication Interest Group’s Professional Freedom and Responsibility Chair for the upcoming year.