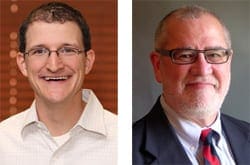 In a time when full-time professors at state universities seem to be a thing of the past, the School of Journalism and Electronic Media is proud to welcome two new full-time assistant professors, Dr. Nicholas Geidner and Dr. Michael Martinez

Nicholas Geidner received his B.A. from Youngstown Sate University, his M.A. at Ball State University and his Ph.D. from The Ohio State University in June 2011. His academic research focuses on new media, journalism, and community cohesion. Geidner work has been published in multiple academic journals and presented at various academic national and international conferences.

Geidner’s professional experience as a newscaster, producer, videographer, and still photographer may seem like a typical career in mass media, but he made time for his interests in new and interactive media. Geidner won a Regional Emmy for his work co-founding and creating an interactive homework help show aimed at the fifth to eighth grade demographic. He also co-founded and created YoungstownScene.com, an online entertainment guide for the Youngstown, Ohio region.

When Geidner is on his own time, you can find him running, hiking, or enjoying a cup of coffee. Geidner says, “I am coffee snob and roast my own coffee.”

His research focus deals the with the conflict between the First Amendment freedom of the press and the Sixth Amendment right of a fair trial. Martinez says, “My current research is to produce knowledge about how electronic media access to the judicial system, more commonly known as ‘cameras in the courts,’ benefits democracy.”

Martinez moved to Knoxville to take the position with the University of Tennessee in 2011 with his wife and 5 dogs: 2 border collies, a lab/collie mix, a Newfoundland/collie mix and a Japanese chin. Martinez lovingly says he has grown children, “so the dogs are our family, now.”