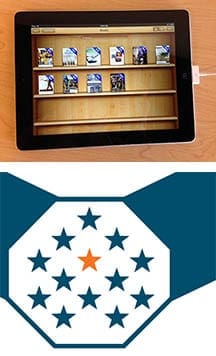 Two innovative projects championed by the School of Journalism and Electronic Media were recognized during a reception in the Scripps Lab on Sept. 26, 2013.

In his introduction, School of Journalism Director Peter Gross told guests that the Tennessee Journalism Series and the Medal of Honor Project have the potential to greatly affect campus as a whole.

The Tennessee Journalism Series is a set of multimedia textbooks developed by JEM for the iPad. Twelve textbooks are available for high school and collegiate journalism courses.

“It’s the textbook platform of the future, and we want to be ahead of the curve,” said Professor James Stovall, who has shepherded the project.

The most recent iBook, released earlier this month, was produced in collaboration with the News Sentinel.

“Our relationship with the School of Journalism and Electronic Media is one to be considered very important,” said News Sentinel editor Jack McElroy.

The 12-month project, led by professor Nick Geidner, will raise awareness about the Medal of Honor through a series of documentaries and multimedia projects produced by students.

“Their stories are just as powerful, brave, and courageous, and I’m personally excited for this documentary of amazing women,” said Geidner.

The unique opportunity to report on the 2014 Medal of Honor Convention has influenced JEM curriculum. Military reporting has been incorporated into several courses, while workshops and seminars are being planned around the topic.