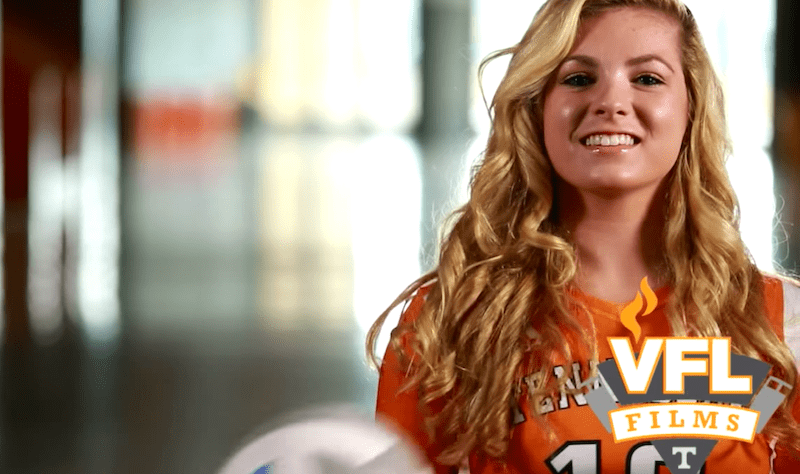 Claudia Coco is an extremely busy person. She’s an integral member of Tennessee’s volleyball team, she’s a full-time journalism and electronic media student at UT, and she is an intern with VFL Films, the official film production team for Tennessee athletics.

What is it like balancing volleyball, school, and working with VFL Films?

Hard. Really hard. This week, I’m a little more than overwhelmed. But, it’s basically just finding a way to balance everything I have going on. I have to plan far in advance. Like, I have a paper coming up in three weeks and I’m going to start writing it tomorrow. I can’t procrastinate, it’s not an option. With these stories (for VFL films), I try to get them started and give myself a two-week time period to actually get them done because they have to go through three different people to actually get posted and the time I have to get in the office is minimal.

What is your ultimate goal in journalism?

Eventually, I would like to work my way up at the SEC Network or ESPN and make my way there but I know realistically coming out, that may not be possible. So, I’m probably going to be applying to local news stations, start in a small market and then hopefully within the next five years I can do what Courtney Lyle (former WBIR sports director, current SEC Network analyst) did.

What advice would you give to students who want to get the internships that you’ve had?

Just put yourself out there. Don’t be afraid to talk to news directors because it can be kind of intimidating. You know, everybody was where you are at some point, so it’s totally okay to say “I’m not quite sure how I feel about this” or “I don’t really understand what I’m doing.” They’re not going to punish you for it, they’re going to help you the best they can. Just be aggressive. They like aggressive people.

How has your experience in UTK’s School of Journalism and Electronic Media helped you in your internships?

Well, Dr. Swan has been great. In his television news journalism class, you really learn how to go out and just do it yourself. Because you have to go out and shoot and edit everything yourself and its kind of sink or swim. You’re either going to do it or you’re not going to do it. And when I got into an internship, it was really nice to say “oh yeah, I do know this editing software” or “yeah, I do know how to run a camera and do this shot.” It’s really nice to be able to go in and actually be helpful and knowledgeable about something rather than just starting at square zero.