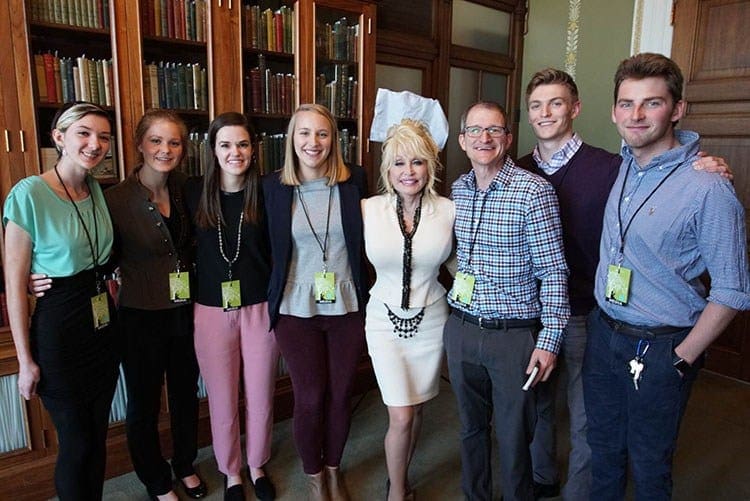 The College of Communication and Information contingent was there as part of Land Grant Films, which was chronicling the event for its newest documentary, tentatively titled 100 Million Stories. Though pegged to the milestone book presentation, the documentary will tell the story of the program which delivers free, high-quality books to children from birth until they begin school without regards to income. It will also detail the history of the program, its impact, and feature some recipients of the free books.

“This event is one of the primary parts of the documentary because we want to celebrate this amazing milestone,” said Nick Geidner, JEM professor and director of 100 Million Stories. “The Library of Congress event will be seen throughout the film, so it’s an important shoot.”

“For the documentary, I will be acting as the director of photography,” said Zych of Kingsport, Tennessee. “I will be in charge of the video shoot during the event, the establishing shots, as well as the interviews.”

While in Washington, the crew had the opportunity to interview the 14th Librarian of Congress Carla Hayden, Ward 6 Councilman Charles Allen, and Parton.

Geidner—who launched Land Grant Films several years ago as a way to give students hands-on experience in documentary storytelling while providing no-cost video services for local nonprofit organizations—has said he hopes PBS or Netflix will be interested in airing 100 Million Stories once it’s done.

Tuesday’s celebration, which featured a question-and-answer session between Parton and Hayden, as well as a reading of Parton’s book Coat of Many Colors, was streamed live online.

See other coverage of this story at: