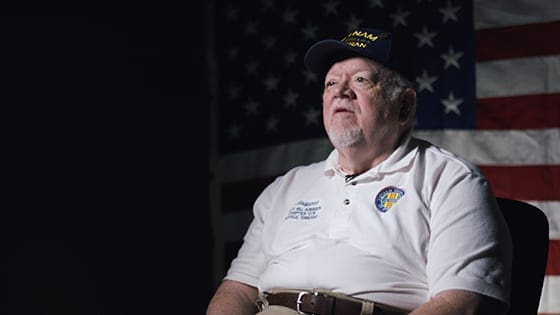 Welcome Home Brother is part of the Land Grant Films’ Defender of the Dream documentary. The project was produced in collaboration with East Tennessee PBS.

For this project, Morris, originally from San Diego, California, and Fowler, a native of Roane County, Tennessee, were paired with mentor Rich Middlemas. Middlemas, a 1997 JEM alumnus, is the Academy Award–winning producer of the feature documentary Undefeated.

Along with its selection for the Nashville Film Festival, Welcome Home Brother received first place in the short documentary category at the College Media Association’s film festival and is a finalist for the 2017 Tennessee AP College Contest Awards in TV specialized/topic reporting.

Welcome Home Brother became a family affair for the two students. Morris’s father did the voice-over and the film was dedicated to Fowler’s father, a Vietnam War veteran.

“To be able to honor the documentary for my dad means more to me than any of these awards,” said Fowler. “It’s been a very special project.”

The full program for the Nashville Film Festival is scheduled for release later in April.

Land Grant Films was launched by Nick Geidner, a professor in the School of Journalism and Electronic Media, several years ago as a way to give students hands-on experience in documentary storytelling while providing no-cost video services for local nonprofit organizations.