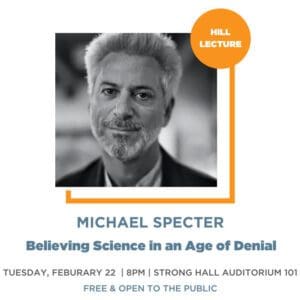 Michael Specter, Science Writer for The New Yorker and winner of 8 international awards for his work, will speak on “Believing Science in an Age of Denial” when he delivers the 29th annual Alfred & Julia Hill Lecture at 8 p.m. on Tuesday, February 22 at the University of Tennessee, Knoxville. The event, which is free and open to the public, will be held in Strong Hall Auditorium (Room 101) on White Avenue.
More information…

The Alfred & Julia Hill Lecture Series on Science, Society, and the Mass Media was established in 1989 by Tom Hill, former publisher of The Oak Ridger, and Mary Frances Hill Holton in honor and memory of their parents.

Alfred and Julia Hill founded The Oak Ridger in 1949, seven years after the government established Oak Ridge to house workers on the atomic bomb project. The Oak Ridger was the first successful privately owned newspaper in the city and marked an important stage in the transition of Oak Ridge from federal operation to private ownership and self-government.

Tom Hill and Mary Frances Hill Holton were also the principal benefactors of an endowment for the School of Journalism and Electronic Media in 1987 to match State of Tennessee contributions to establish the Julia G. and Alfred G. Hill Chair of Excellence Professorship in Science, Technology, and Medical Writing and the Science Communication Program at the University of Tennessee.