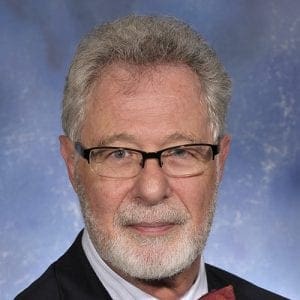 Dr. Peter Gross served as Director of the UT School of Journalism and Electronic Media from 2006 to 2016. Before taking on his administrative duties at UTK, Professor Gross held the Gaylord Family Endowed Chair (international communication) in the Gaylord College of Journalism and Mass Communication, the University of Oklahoma. His research specialization is in international communication, with an emphasis on East European media systems.

He was instrumental in establishing a new journalism program in 1992 at the University of Timisoara West, Romania. He frequently lectured at the U.S. Department of State's National Foreign Affairs Training Center (School of Professional and Area Studies – Foreign Service Institute) and carried out training and media assessment assignments on behalf of the U.S. Information Agency (U.S. Department of State), the Voice of America's International Training Program/International Broadcast Bureau, the Eurasia Foundation, and the Academy for Educational Development. He also conducted journalism-training seminars in the U.S. and in country for journalists and journalism students from Albania, Belarus, Bulgaria, Estonia, Georgia, Kosovo, Kyrghyzstan, Moldova, Romania, Russia, Serbia-Montenegro, Tajikistan, Turkmenistan, Ukraine and Uzbekhistan.

He served as consultant on East European media issues to the Washington D.C.-based International Media Fund, The Freedom Forum, and the Eurasia Foundation, and as an educational consultant to Radio Free Europe/Radio Liberty in Prague, Czech Republic. In 1998, Gross received the Secretary's Forum Distinguished Public Service Award from the U.S. Department of State.

Dr. Gross received 49 fellowships, research, lecture and training awards and grants from, among other institutions, Harvard University's Joan Shorenstein Center on the Press, Politics and Public Policy, J. F. Kennedy School of Government; the National Academy of Sciences; the International Research and Exchanges Board; the Pacific Cultural Foundation; the International Media Fund; the Soros Foundation; the German Marshall Fund of the United States; the Freedom Forum; Fulbright; and the National Science Foundation. In 1996, he was a research fellow at the Woodrow Wilson International Center for Scholars in Washington, D.C.

He is the author/co-author of seven scholarly books and two textbooks, and co-editor of two book collections. Gross published over 170 book chapters and articles in American and European academic, professional journals and general circulation media (e.g. The Los Angeles Times, The Christian Science Monitor, Editor & Publisher, Columbia Journalism Review, Social Europe). He is currently a columnist for TransitionsOnline, a Czech-based journal covering politics, economics, society, culture and media in Eastern and Central Europe.

In 2009, the State of Romania awarded Gross one of its highest national awards, the “Order of Merit in Education,” Commander Grade. The President of Romania confers the award, by decree, for “unusual merit in the development of education of different types, levels and forms of organization, and in research, or (for) contributing to establishing relationships between foreign educational institution and Romanian ones.”