Kendall Downing has worked in various markets:  WYMD-TV in Hazard, Kentucky, WPSD-TV in Paducah, Kentucky, WXIN-TV in Indianapolis, and back to his hometown of Memphis, Tennessee at WMC Action News 5.

For Downing, it was always a childhood dream to work in news. It’s no wonder he started setting himself apart from his peers as soon as he started college.

“The first thing I did was try to get myself in front of people that would get me as much experience as possible” Downing said.

Downing became heavily involved on campus, both in student media like The Volunteer Channel, and also outside of his major.

“I knew people from a variety of different walks of life on campus,” Downing said,” which I think helped me to be more plugged into my major and what I did.”

One piece of advice Downing believes helpful to journalism students is developing secondary skill sets to complement a journalism degree.

“Looking at the job market, it’s about flexibility and how can you market yourself,” Downing said.

Minoring in Spanish, Downing says that “you can never have too many skills.” He believes that having a diverse set of skills can give journalists diverse perspectives, an advantage when it comes to reporting the wide range of topics journalists face day to day.

“I don’t think anyone has ever been told that they know how to do too much.”

Knowing how to do too much is never the reality of a journalist. In fact for Downing, not knowing is usually a perk of the job.

Some days are tougher than expected, go differently than planned, but he “never gets bored.”

Adversity is something Downing is familiar with, especially when he first graduated from UT in 2010 and started working in Kentucky in a very small, rural market.

“It’s hard to be a kid out of college and you’re in a community being a working journalist doing these stories about tough topics- Murder, crime, violence. Not to mention, when you’re working in a small market you’re doing it all.”

Besides dealing with difficult topics on the job, Downing also stressed that students who want to be journalists need to be aware of just how poor the pay and hours are for those entry-level positions.

“The pay is really bad. I cannot say that enough,” Downing said. “You are going to work a lot. You’re typically going to be away from your family. You’re going to have to work holidays.”

Downing is quick to add that there is light at the end of the tunnel:

“Those things eventually get better. You have to stick it out throughout some of the first years which can be really, really tough. You have to grin and bear it and just keep working until you get to a better point. Just know that it comes, it just takes time.”

Grit is another quality Downing believes aspiring journalists must have to be successful in their careers.

Tough assignments, long hours, and low pay- just a few of the negatives journalists experience in their careers. However, any career comes with negatives, and Downing highlights the many positive aspects that come with being a journalist as well. He enjoys the humanitarian aspect of the job and being able to make a difference in peoples’ lives, like the time his story was able to help a man get his car back after it was stolen from him. 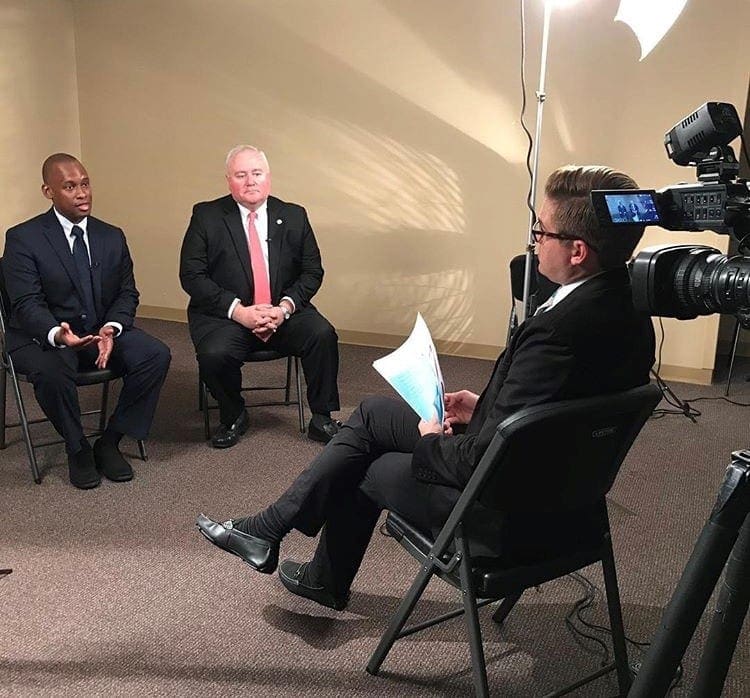 Downing has some advice for those students who are willing to face the ups, downs, and uncertainties of working as a journalist.

For one, Downing advises that students be curious and “voracious readers” of news. If news doesn’t interest you, then “you probably shouldn’t do this career path” he said.

“The job is not easy, but you have to understand it takes someone who has skill and talent to be able to come in and be curious and empathetic toward people who have dealt with horrific things,” he said. “It really takes a person with a genuine interest in people to do this job and do it well.”

Downing has come a long way since graduating and is still pushing himself to do more. He is currently enrolled in the MBA program at the University of Memphis and working full time.

While working through the challenge of finding a balance between school and work, Downing is leaving the next chapter of his life wide open: