*Andrea Hall now teaches at Troy University as an Instructor. 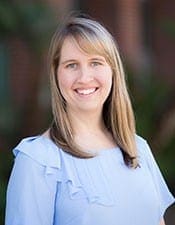 Students in their first journalism classes find themselves daydreaming about reporting on the sidelines for ESPN, interviewing A-list stars for People magazine or co-hosting a major network’s morning talk show. But for some, the road to success is not mapped out clearly in black and white like the content they write.

Andrea Hall, an assistant professor of journalism at Auburn University, did not set out on her academic journey with intentions to teach journalism and design. In fact, academia seemed far from an original goal.

“When I was at the University of Tennessee, I wasn’t 100 percent sure, really, what I wanted to do,” Hall says. “I changed my major three times. I was originally in business administration.”

Hall changed her major to advertising and entered the College of Communication and Information. After a presentation about study abroad opportunities in journalism, Hall decided to change her major yet again, this time to journalism. She wrote features for the Daily Beacon and the nascent Tennessee Journalist, in its second year in 2007, to gain exposure to the field. Loose affiliations with student media provided practice, but Hall’s professional track remained uncertain as she finished undergraduate study.

She got a job.

Determined to work, Hall prepared to move to Greenwood, Mississippi, for a reporting position at the Greenwood Commonwealth newspaper at a time when many newspaper publishers laid off writers or filed for bankruptcy.

“Before I showed up, they called back,” Hall says. “I was pretty sure they were going to fire me, and I hadn’t even shown up yet.”

Instead, her new employer offered her a position working in the lifestyles section. Hall wrote, edited and designed the section focusing on the community, particularly for the Sunday paper. In 2011, Hall received the Mississippi Press Association’s first place award for Best Lifestyles Section or Page.

In an article for Tennessee’s Winter 2010 SCOOP Magazine, former co-worker Bob Darden said Hall took the section and really “ran with it.”

“She has more energy and more creative ideas,” Darden said. “That’s all self-started.”

During her time in Greenwood, Hall realized each person she encountered worked toward life goals of his or her own. Her work allowed their stories to appear in print as she continued her personal journey in media.

Hall’s work fostered a new goal: graduate study. With a newly discovered passion for design, Hall resolved to delve further into media and attain a master’s degree in journalism, particularly focusing on design.

Hall took her skills to the University of Missouri where she served as a designer, art director and creative director for VOX Magazine, a weekly city magazine run by the Mizzou School of Journalism.

She did not stop there.

Following in her father’s footsteps, Hall continued her academic career at the University of Florida, from which she received her Ph.D. in mass communications. At Florida, the same skills she used as a student reporter, newspaper professional and graduate student helped her to write stories for the Wertheim College of Engineering as a marketing and communications specialist.

“They’re just stories about people,” Hall says. “It’s the same [skills], whether I’m writing about the woman who lost 50 pounds, or a local mayor or an engineer. I want to make sure I am telling their stories.”

“When I talk about photo shoots, everyone thinks it’s this really glamourous experience,” Hall says. “The reality is, there’s a lot of crawling on the floor and holding bobby pins and safety pins.”

Hall’s academic research, however, possesses an element of glamour, as she studies celebrity news, trending topics linked to social movements and magazine readership. As celebrities take to social media to disseminate information, lines blur between promotion and reporting.

“Is that PR, or is that journalism?” Hall asks of reporting on celebrity announcements. “How much independent reporting are we doing? Who are these sources? There’s a lot of questions out there.”

“I love reading about celebrities, so my research is very fun.”

“She really enjoyed teaching [her] class,” one student said on RateMyProfessor.com. “You can tell she’s knowledgeable.”

Hall draws on personal experience from her professional work and invites guest speakers to share information with her classes. She says networking remained a key to her success, one that now benefits her own students.

“[Friends in media] are out there working every single day in broadcast, or online, or building their own newsletters, or working in radio or sports,” Hall says. “Their professional experiences enrich my students’ educational experiences.”

Hall, as a former media student, empathizes with her current students’ challenges as they outline professional goals. She listened to guest speakers in her large lectures in communications as a Tennessee undergraduate. From both the perspective of a student and professional, Hall sees value in professional practice.

“I’m trying to show [my students] that the work that they’re doing needs to be elevated, to be professional work, and that they have the skills to do the job.”

Though some journalism students may not know which career paths they will pursue, Hall encourages tenacity.

“Don’t give up,” Hall says. “It’s a long road…but the work that you’re doing is important.”