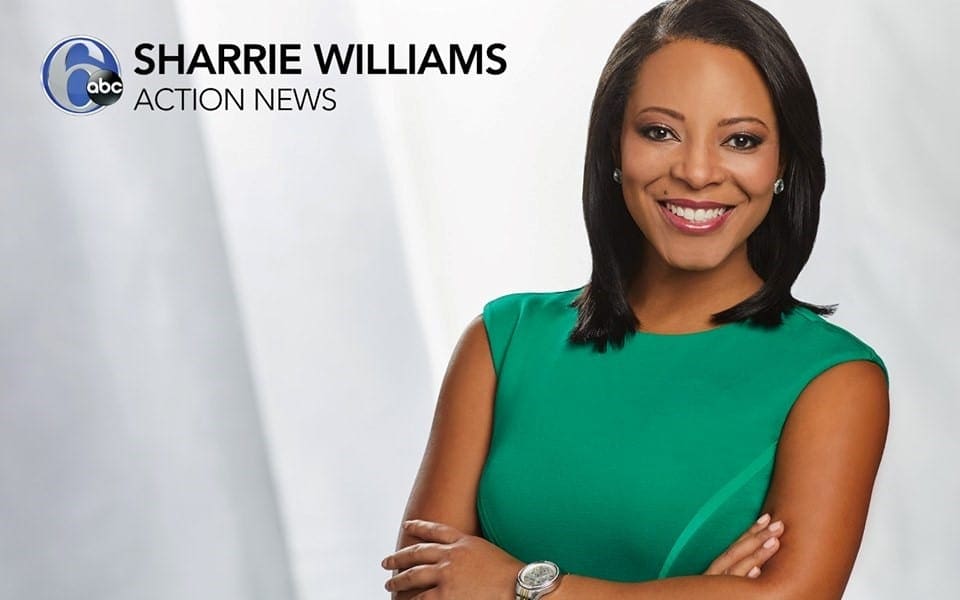 Today Williams is a reporter and anchor at ABC-owned WPLY-TV in Philadelphia, the fourth largest television market in America. Her journey from a station on a dirt road in market number 186 to one of the most popular evening news shows in the country was driven by goals, hard work and confidence, she said. And she’s still working hard for her ultimate goal: network news.

Williams, who grew up in Bartlett, a suburb of Memphis, did spend just one year in her first job, then she made a tremendous leap from market 186 to market 40 in Birmingham, Alabama, where she spent four-and-a-half years as a reporter, anchor and sports anchor.

From there she leapt to market number 17, a CBS station in Miami, and after three years, moved up to the CBS station in Dallas, the fifth largest market in the country. Three years there led her to Philadelphia.

She hasn’t waited tables in a long time.

Her career has led to interviews with sports stars, presidents and celebrities such as Barbara Walters. While the glamorous subjects are exciting, she said, it’s the more ordinary ones that often appeal most to viewers. Her interview with the parents of a baby with a severe birth defect that would allow him to live for only a few hours went viral. People across the country cared about “the bucket list baby.”

Talking with people dealing with tragedy and grief requires special skills as a journalist, she said.

“You have to balance being a factual journalist, not getting involved in a story, with letting interviewees know, ‘I’m a person, too,’” she said.

Her ability to show empathy while remaining professional has set her apart, she said. And that matters in telling a story.

“Don’t forget, these are people,” Williams said. “Ask yourself, if it were my family, my situation, how would I wanted to be treated?”

Professionalism and compassion are a given, Williams said, but her ultimate expectations for herself is perfection.

“The stakes are high,” she said. “People don’t forget.”

Her best news director ever, she said, was the one who “was on me all the time,” who would call her the moment a live segment ended to critique her performance.

“I saw that woman in my dreams,” Williams said.

Later, the news director told her that she pushed because she saw that Williams had potential. But potential only goes so far.

“You have to hit the mark every day,” Williams explained. “The news goes on the air at 5 p.m. whether you are ready or not. You have to be ready.

“The job is the job, no matter what newsroom,” she said. “My expectation is always more than anyone else has for me…  I always say to myself, ‘Be good, Sharrie.’ That way, no one will be able to say, ‘You sucked.’”

Being a woman and a minority in the newsroom has been a challenge, she said. Even though times have changed, “some barriers still need to be broken.”  In her second job, she became the first black female to do television sports in the Birmingham market. That year, 2007, was her most difficult.

“When you are first, it will be difficult,” Williams said. “But the level of support I got was just as loud as the people who didn’t get it. We have to choose what we focus on.”

Her focus, as always, was on excellence.

“Do your homework. Come in early. Stay focused. Be your best,” she said. “This business is not for weak people, or for people who can’t deal with conflict. You have to be grounded in who you are and be ready.”

Sharrie Williams has developed that work ethic through years of experience. She worked with The Volunteer Channel as a UT student and later with Fox Sports Net South while she was still in school. She was always looking for opportunity, she said, always introducing herself to people in industry and maintaining contacts. On spring break, she hit the road to tour television stations and ask for advice.

She still works hard to be the best and to get better, she said, and to tell a story better than anyone else. That means learning social media platforms and other new ways of disseminating information. She maintains the Facebook page her Philadelphia station developed for her and live-Tweets just before she goes on the air.

To students, she advises, “Knock it out of the park every day. You never know who’s watching you.”