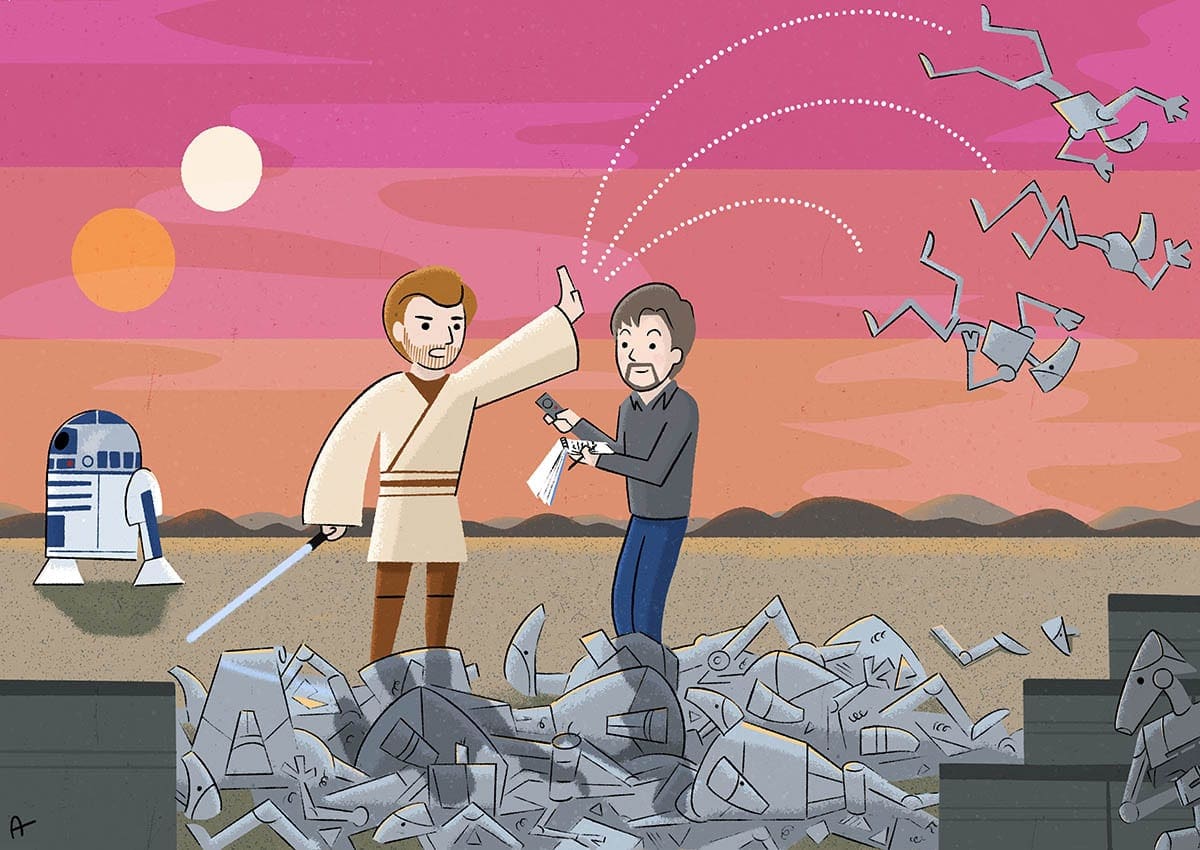 After graduating from the University of Tennessee where he served as editor of The Daily Beacon, John Jackson Miller (JEM ’90) set his sights on the stars.

Specifically, the stars in a galaxy far, far away and the ones in the far-flung future where no man has gone before.

Miller turned his lifelong passion for comic books and science fiction into a career, evolving from a trade publication editor to a creator. Today, he is a New York Times bestselling novelist and comic writer for Star Wars, Star Trek, and many other fantasy licenses and original works in between. His characters have made it to the big screen, and fans have even named pets (and at least one human child) after his creations.

His next full-length novel, Star Trek: Discovery – Die Standing, will be released July 14.

Miller started writing his own comics when he was six years old. His mother was a grade-school librarian and fully supported his obsession with comics as a child.

“While other people’s mothers threw their comics away, mine encouraged me to put my comics in order,” Miller said. “I still have everything I ever bought.”

His ability to distribute his comics writing changed radically when the Miller family brought home a photocopier while he was in junior high. Suddenly, he could start sharing his work with others on a much larger stage.

The fanzine industry was going strong in the 1980s with fans of pop culture, science fiction, and hobbies circulating their own publications full of articles, art, and original stories. Miller produced his own content, and some of his writing was picked up in national fan groups.

Miller then served as his high school’s newspaper editor. He already knew how to paste up a newspaper; after all, he’d been making his magazines at home for years.

‘You Majored in Beacon’

When he drove from Memphis to Knoxville to start college, Miller set his sights on the more practical outer space: engineering and a job building spacecraft. His father owned an electronics firm and had always encouraged him to learn about science. Miller even took a trip to Cape Canaveral over his final spring break as a high school senior.

After his first semester, however, Miller walked over to Circle Park to became a news editorial journalism major. He said he tried to find his place on the Daily Beacon staff as a sophomore but was not sparking his own interest while reporting on some of the drier aspects of student life.

Finally, his big break felt like something out of a movie.

“I was there in the Beacon office with my notebook waiting for something to happen when the editor ran in and said we need someone to go upstairs and interview the governor,” Miller said. “He looked around and there was no one else in the room. He said, ‘You kid, Go!’”

Minutes later, Miller was interviewing former Tennessee governor and current Senator Lamar Alexander, whose appointment and run as UT’s systems president was a focus of the Beacon’s news coverage for the next year and a half.

Miller jumped from someone struggling to get bylines to the head of the administration beat a few weeks later. He was quickly promoted to managing editor, a role he held until becoming editor-in-chief as a senior in 1989-90.

As editor, he wrote more breaking news articles to build his clip file; he and the Beacon staff were in Washington, D.C., at an investigative reporters’ conference when the Berlin Wall fell. He also explored writing movie and comic book reviews.

“In your final year, the joke was you majored in Beacon,” Miller said. “That is kind of what I did.”

Miller graduated from UT with his degree in journalism in 1990. He went on to earn his master’s degree in Soviet Studies at Louisiana State University, and in a strike of poor timing, completed a Russian language immersion camp just as the Soviet Union collapsed.

While the Soviet research suddenly seemed unnecessary, his knowledge proved valuable at the start of his comics writing career.

From Lumber to Marvel (and Beyond)

Miller briefly edited for a line of lumber industry trade magazines, but after years of covering breaking news and studying Russian, he found this line of work a bit dull. While reading Comic Buyers Guide, the leading comic collector magazine of the day, he saw an advertisement for an editor for comic trade magazines. Within a month, he moved to Wisconsin, where he still lives today, writing and editing for industry publications alongside comic fandom legends Don and Maggie Thompson, editors of Comic Buyers Guide.

After a dozen years of editing comic, video game, and Star Wars magazines, Miller knew pretty much everyone at Marvel comics. They eventually asked him to pitch a story of his own.

Remember all that Russian study in graduate school? Miller used his education to add lore and details for a new series of Crimson Dynamo, a long-running character that is more-or-less a Soviet version of Iron Man.

Doors started opening. The Crimson Dynamo opportunity in 2003 led to a run on Iron Man which led to writing on Star Wars: Empire. He wrote the script for the popular Star Wars’ Knights of the Old Republic series that ran from 2006-10.

“The way these tie-in licenses work, they look at your past work,” Miller said. “If you’ve worked for one famous brand or character and you haven’t ruined it, that’s a stamp on your passport. Star Wars opened every door after that.”

After a decade of writing comic book scripts and short stories, Miller published his first full-length novel in the Star Wars galaxy. Star Wars: Kenobi debuted at No. 12 on the New York Times Bestseller List when it was released in 2013. He dedicated the book to his sister, who made sure he got to see the first Star Wars movie before it left theaters.

Miller has written more than 3 million words in his professional career, all but 100,000 belonging to someone else’s sandbox or creative universe. His five-year run on the Knights of the Old Republic comic series spanned nearly 1,300 comic pages.

While writing in an established fantasy and licensed work has presented Miller with a ready-made fan base ready to devour his next book or comic, a downside is he has not had as many opportunities to pitch original ideas for television or movie treatments.

Some of his original ideas and characters from the comics, however, have made it to the big screen.

During his run on Iron Man, he created Sonny Birch, a villainous business executive and weapons dealer. The character appeared in the 2018 Marvel film, Ant Man and the Wasp, played by Walton Scoggins.

Miller and his wife, Meredith, were flown to Los Angeles for the premiere. While there, he finally met Jorge Lucas, the artist from Argentina with whom he had collaborated on the Iron Man comics years earlier but had never seen in person. They were both credited in the film.

Advice in a Changing Market

When Miller is asked – and he’s frequently asked – how to get a job doing what he’s doing, he is often at a loss. The truth is, his particular path through trade magazines to Marvel, Star Wars, and fandoms beyond no longer exists. The comic trade magazine company he worked for in Wisconsin had 700 employees at its peak before selling to a succession of equity firms and eventually declaring bankruptcy.

His best piece of advice to writers? Keep expanding your skill set.

“What I learned at Tennessee, about hitting a deadline and putting together a magazine or newspaper, it’s serving me well because now everybody has to be his own publisher whether they are doing their own blog or podcast or anything else,” Miller said.

Vital skills for today’s journalists often extend beyond storytelling. Miller said selling advertisements is just part of a day’s work for many of his colleagues in comics journalism.

‘There’s a Zayne Out There”

When it comes to writing for a Star Wars or Star Trek project, Miller has thousands of hours of built-in research from watching movies and TV shows growing up. In his licensing work, he strives for in-universe accuracy while veering away from a temptation to excessively namedrop characters or lore.

Ultimately for fans, telling a good story is most important.

“Readers can tell if you’re faking it,” Miller said.

While novel writing itself can be more of a solitary experience, Miller has been able to experience the effects of his creativity firsthand at fan conventions all over the country. He has come to understand how his books and stories can inspire or benefit people who might be struggling in their day-to-day lives.

He said it was an eye-opening experience seeing two people dressed up as characters from his Knights of the Old Republic series for the first time at the 2007 Star Wars Celebration (“I might have been the only person who recognized what they’d dressed up as!”). Another group of fans constructed a life-sized puppet of one of his alien characters for one of his book readings.

What took the cake for Miller was meeting parents who had named their son after Zayne Carrick, a Jedi protagonist from Knights of the Old Republic.

“There’s a Zayne out there,” Miller said. “He’s probably eight or nine right now. It’s flattering, but it also shows how seriously people take this. As writers, we have to take it seriously as well.”